How I First Experienced Reiki (My Reiki Story)

Thanks to the organizers of "Reiki Blog Hop" who invited me to join their group
To follow the hop use these links:
PREVIOUS   MASTERLIST  NEXT

From a young age I have felt that Japan has always called to me, its culture and spirituality spoke deeply to me, but it wasn't until I was in my mid-30s that it gave me the gift of Reiki. I have been on the path of practicing and studying Japanese Buddhism since 1989. In the 90s I was a Producer for a Japanese Japanese Television Production Company based in NYC that broadcasted nationally in Japan on Nippon TV. This company sent me on my first trip to Japan in 1995 (at the age of 25) and it was then that I first visited Kyoto, Japan's sacred former-capital city. Kyoto's almost countless temples (numbering over 1600) and its spiritual richness made a deep and lasting impression on me (Little did I know then but I would one day live in Kyoto). 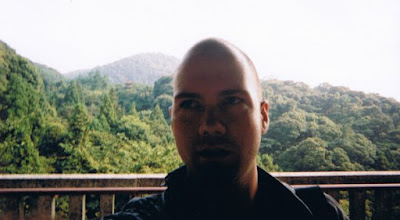 I returned to Japan for a visit in 2002 as I continued to practice Zen and Jodo Shinshu Buddhism. In 2005, I joined the Assistant Minister Training Program at the New York Buddhist Church and became a confirmed Buddhist there in 2006 receiving the name "Jyogan" meaning "Pure Vow" referring to the vow the Buddha took to help all become enlightened and took this meaning on as my personal dedication as well. I was at the time planning to become a Buddhist priest when something pivotal happened I was accepted to the 2007 JET Program to teach English in Japan. JET placed me in a small town in the mountains of Nagano; what the Japanese refer to as the "Hara" or "energetic center" of Japan. Being transplanted from the Lower East Side of Manhattan to the Mountain tops at the core of Japan, brimming with nature, was a very transformational and spiritually opening experience. It felt to me that my years of Buddhist practice were now planted in this fertile soil so that they could truly grow. 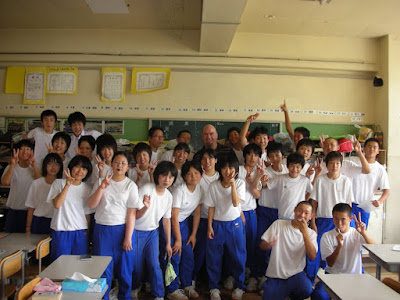 With some of my English Students, Nagano, Japan 2007

The following year, in 2008, I followed the calling to move to Kyoto and while living there I heard about a weekly Reiki share at a local temple about 3 blocks away from where I taught English. I didn't know much about Reiki and had never had an experience with it so I decided to try it. When I went into Daizen-in temple I was greeted by the warm welcoming glow of Rev. Hyakuten Inamoto and while I was receiving Reiki by about 6 people at the same time (in a room full of about 30 attendees)... I began to cry... uncontrollable crying... tears of deep deep connectedness and happiness... it was unlike anything I have ever experienced before! I felt connected to something greater... to Source Energy... to my true self beyond ego. A feeling of contentedness to... well... EVERYTHING.

I realized that this was what I was looking for in my Buddhist practice all this time and I was certain after that night I would study Reiki with Inamoto Sensei. A few weeks later I took the Level 1 Shoden class with him and began my service to Reiki. In more ways than one Inamoto Sensei was the perfect teacher for me him being a Buddhist Jodo Shu Priest and my studying Jodo Shin Shu (both branches of Pure Land Buddhist teachings). I knew deep in my core, my hara or tanden, that my spiritual path from that time forward would be Reiki. In time, I completed Reiki 1, 2, and 3 with Inamoto Sensei while living in Kyoto while attending his weekly Reiki shares and practicing with him and his students every week. 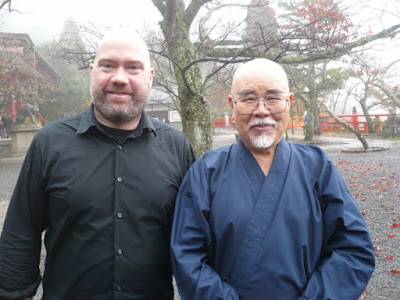 It was also during this time in Kyoto that I met my Japanese partner, now spouse, and we returned to live in NYC in 2010. Later that year, I helped to open and managed a Spirituality Book and gift store called Namaste Bookshop near Union Square in NYC where I offer Reiki Treatments, Training, and , Reiki Shares. In 2015, I started to provide Reiki full-time and I became a fully ordained Buddhist Minister and now also offer Reiki themed Wedding Officiation and Meditation Classes. I am also currently producing a documentary about Reiki that will feature Hyakuten Inamoto.

It is with a "pure vow" that I teach Reiki with the traditional Japanese style and a spiritual focus. I am overflowing with gratitude to Mikao Usui, Hyakuten Inamoto Sensei, and to Japan itself for the gift of Reiki and I am so proud to share it with my students. 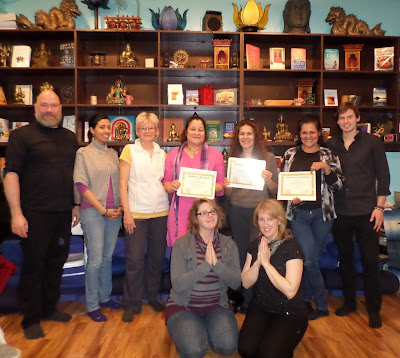 Everyone Glowing after a Reiki 3 Class, New York City, 2015